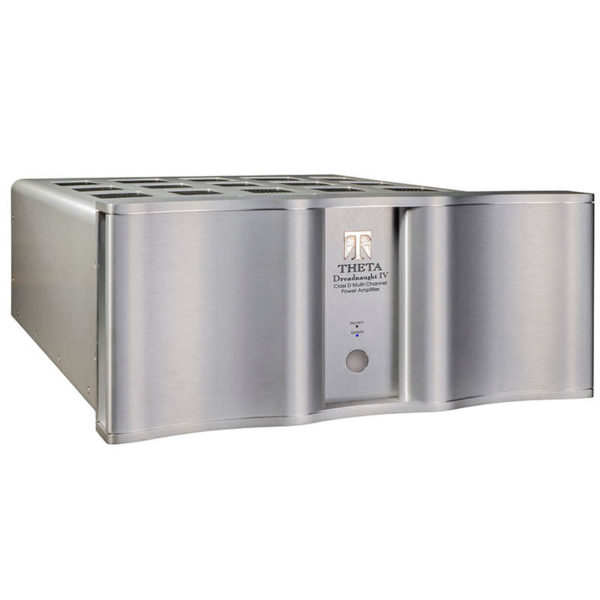 The Threshold of Perfection

The key enhancement in the Dreadnaught III’s design is the incorporation of ThermalTrakTM audio output transistors resulting in increased audio performance as well as overall reliability. These new devices allow accurate control of the output stage bias while preventing “thermal runaway.”

Distortion levels are dramatically improved. The signal to noise ratio is greater, with a lower noise floor through the elimination of oscillation at the zero volt crossing. All this refinement is accomplished in real time!

As with its award-winning predecessors, the Dreadnaught III is designed to allow amplification modules to be installed in any of its five slots at any time. Each module is a separate “plug & play” unit. The Dreadnaught III can begin as a stereo amplifier, using two of the available 1 x 250 watt mono modules, and then grow to a five channel version later by adding three more modules. Or, using the available 2 x 100 watt stereo modules in the Dreadnaught III, it is possible to have up to ten channels of power in a single chassis – an excellent choice for use with speakers throughout your home as a distributed audio amplifier.

We continue to take design inspiration from our Casablanca III HD controller, with a modular configuration affording total flexibility. The quality of the Dreadnaught III amplifier doesn’t go down when you add more channels, and you aren’t forced to get everything all at once. Theta’s “open architecture” components allow you to custom configure your system to your needs.

What is a feedback? Like a snake biting its tail, a negative feedback loop sends some of its output signal back to its input. To cancel out the errors that have crept in during the amplification process, a compensation signal is applied at the input. Obviously, this correction cannot actually take place instantaneously.

Small amounts of feedback, within a single gain stage (called “local”), help ensure circuit stability and keep the circuit’s processes on track. Delay is miniscule in local feedback. Nearly all analog circuits rely on this kind of benign feedback.

However, when applied to an entire amplification chain, often comprising several gain stages, time delay becomes a significant problem. The “envelope” is too big, resulting in serious phase shift and intermodulation of the signal with its own error products. This fantastic complex of distortions goes unmeasured (in all the usual specifications), and is not correctable.

The Dreadnaught III uses none of this kind of “global” feedback!

What does that mean? In essence, each amplifier module is really two mirror imaged signal paths for each channel.

Balanced signals coming in to the amp are kept intact. Single-ended signals are “balanced” at the very first gain stage: the signal is cloned, and the phase-inverted duplicate amplified through a path identical to its twin. The amp’s two signals move the speaker’s elements in a “push – pull” fashion.

Discontinuities arise in the course of amplification, but do not survive in a balanced / differential circuit. Anything not exactly “mirror imaged” between the two signals is eliminated (called “common mode rejection”). This preserves the integrity of the amplified signal.

This no-compromise technique is rarely used, however, because it requires almost twice as many devices as conventional, single-track amplification!

A second button selects stereo or surround channels (assigned by a switch on each module). These two controls can also be activated via remote control jacks, which bring trigger signals from another unit, such as a Casablanca III. An optional bi-directional RS-232 port is available. When connected to a computer or other control device (such as Crestron), this port allows the Dreadnaught III’s controls to be activated, and status information to be viewed, such as the number of channels present, the status of rail fuses, thermal sensors, and stereo or surround power modes.

Each module has LED indicators for fuse status and temperature conditions.

The Dreadnaught III is a tour de force in design, execution and audible performance.